It’s a Monday afternoon in NYC on a warm June day. I am feeling the lull of the post-2PM blues, and I see a notification on my Instagram account. I see one of my girls commented on a post with my handle, @andreakcastillo, and a bunch of exclamation points. I see that the post is on the Refinery29 Instagram account; they had screenshot one of my tweets and used it for a #mondaymotivation post. At first, I am flattered they chose me, given their reach, but as a blogger/freelance writer/content creator in the social media space, I immediately comment on my friend’s comment “woooooow! Can ya girl get credited tho @refinery29?” And so it began.

Minutes after the comment, I see multiple friends IRL and on social media adding my post to their stories, commenting, and pushing the fact that Refinery29 should tag me as it is the ethical thing to do. 24 hours go by, and at this point all the top comments on the post are my friends telling them to properly credit me. During this time, I personally DMed the post to Refinery saying this was my tweet, and how I would like to be credited. No response.

I then go on a bit of a search, scrolling their IG page to see similar “inspirational tweets” and check to see if the authors were credited. Indeed, a few of the authors were credited; one that had over 20K followers, and another that had over 1 million. I scrolled further down the page to find posts similar to mine that were not credited. The linking factor? We all had less than 5K followers.

Riddle me this. As a publication focused on women and their overall empowerment within career, sexuality, self-esteem, beauty & style, just to name a few, why WOULDN’T you tag those with a smaller following? That would be a pretty diplomatic decision, no? But instead, you shine more light on those already in the light. How is this helpful, and how does this contribute to your ideals as a media enterprise?

I am not just upset for the basic fact that my words were stolen and not properly credited, but for the story behind those words in the first place. Here is an image of my tweet that Refinery29 posted:

The date and time of the tweet was April 2nd at 8:50 PM (oddly enough, the time I was born). I wrote this tweet because I was at an extremely low point emotionally and spiritually. Rapper & entrepreneur Nipsey Hussle had been murdered in cold blood 48 hours prior in Los Angeles, and I, like many of my peers across the world were having a very difficult time grasping our new reality. I find myself lucky at this point to have crossed paths with him in 2013 when I worked at an entertainment website, but so much was unnerving to me. How can an individual in the spotlight with such deep ties to his community and the betterment of the advancement of his people be taken from us in such a heartless way? I was particular shaken, as through watching his many interviews, I connected deeply to his ideology, that of speaking the truth. It made me think to myself, “If I continue to speak the truth on social media, and in public spaces, will that be the cause of my own demise?”

Here is the rest of the thread I wrote that evening: 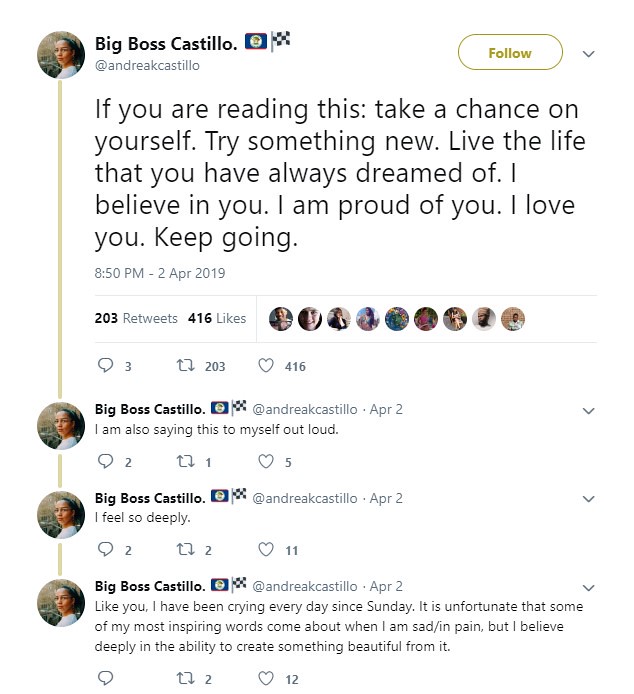 I was overwhelmed by the response, quickly receiving likes and retweets at such a rapid rate that I could hardly keep up. So many personal stories were shared with me, specifically the fact of how timely my posts were in a time when we were hurting en masse. It brought me back to this idea of that I create some of my best works at my lowest points, so for my tweet to be stolen by Refinery29 feels like exploitation. I understand that as a freelance writer, I should be political and not make efforts to burn bridges, but in the words of Erykah Badu, “I’m an artist, and I’m sensitive about my shit.” I have nothing to lose, and everything to gain.

2 thoughts on “So, Refinery29 Shared One Of My Tweets On Their Platform, But I’m Not Here For It”