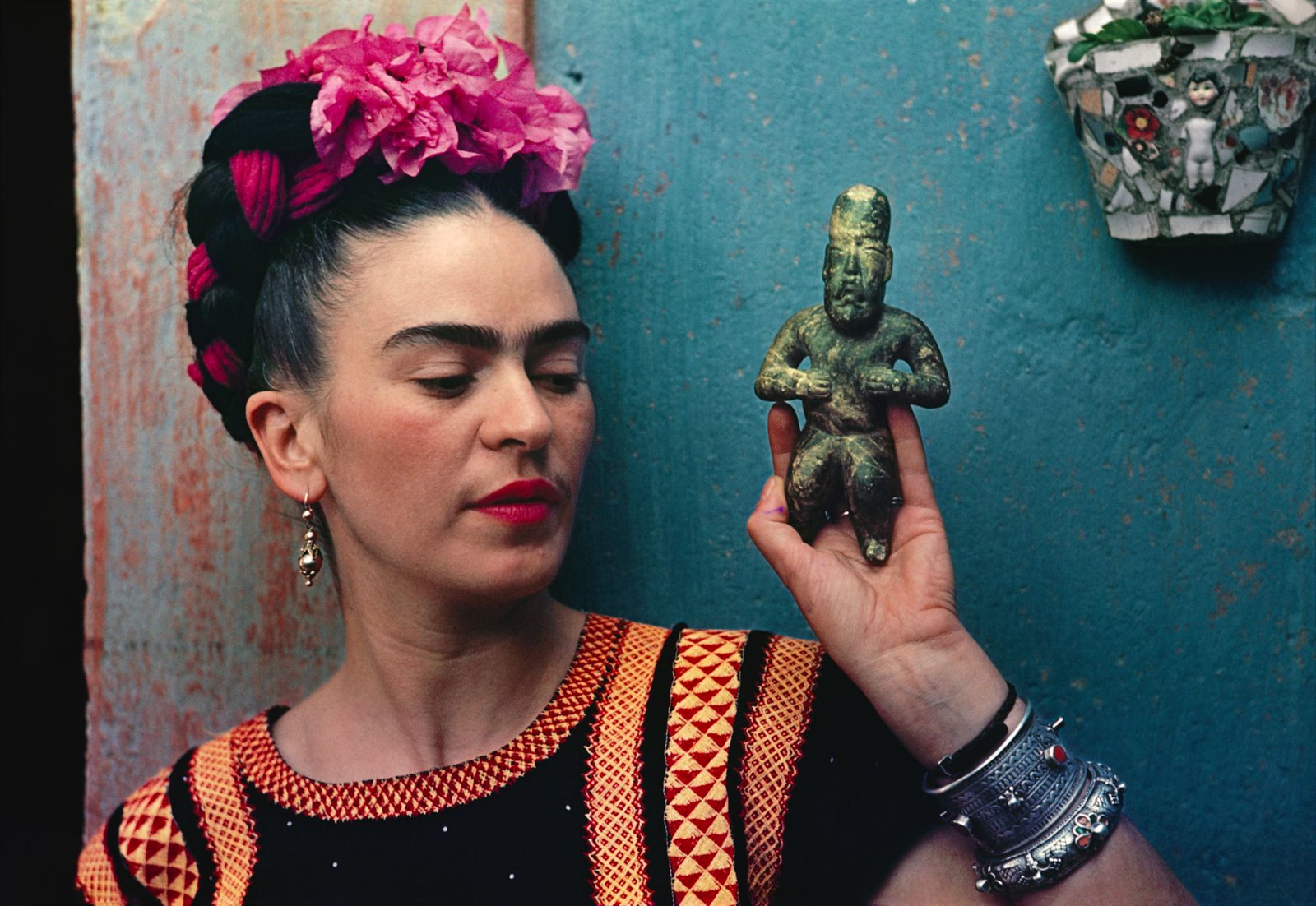 Late last year when the Brooklyn Museum announced they would be curating a full exhibition on Frida Kahlo, I was overjoyed. Those that know me know how much I love the remarkable Mexican artist and iconoclast of a woman. Since my schedule was a bit off around the holiday season, I completely forgot to RSVP to the press preview (I know) but scheduled a time to visit with the help of the Press team at the museum. Frida Kahlo: Appearances Can Be Deceiving opened on February 8th at the Brooklyn Museum. I visited on a Tuesday afternoon in what I would call one of our NYC “slush storms”, but the weather did not deter me from seeing a full exhibit dedicated to one of my favorite women.

I arrived a bit early and sat in the lobby, staring fondly at the LED screen wall at the exhibit’s entrance that blinked “FRIDA KAHLO” in all caps in an energetic color pairing of coral and cobalt blue. I received a complimentary timed ticket (price $20) for the exhibition, which allows patrons an hour to walk through the entire collection of works. Untimed tickets are available as well for $35. The clock struck 12:15 PM and it was my time! I walked into the technicolor reception area where a flavorful soundscape of Latin tunes pumped, curated by Remezcla. 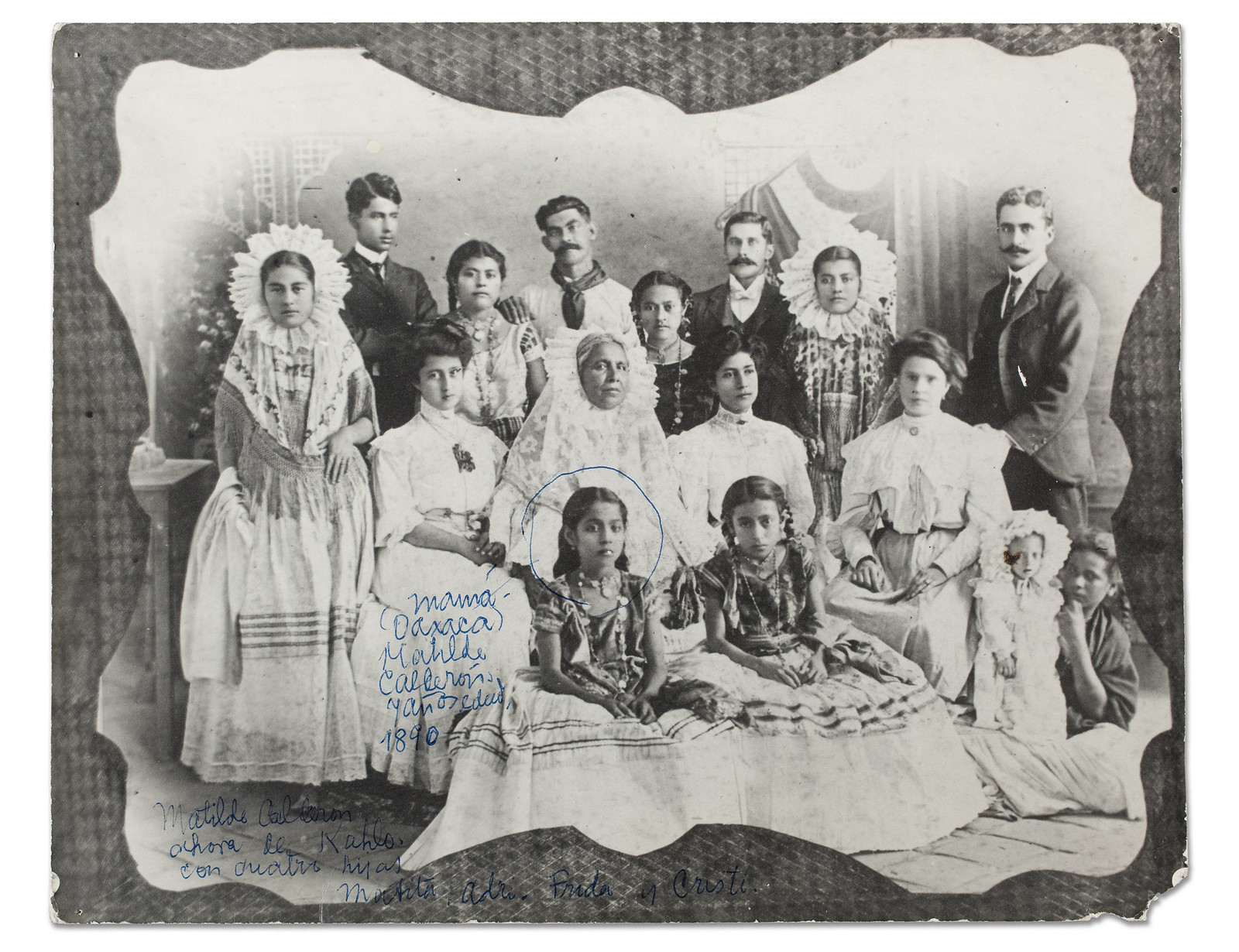 Upon entering the exhibition in the Robert E. Blum Gallery, I was amazed at how large and expansive it is, including intimate family photos & those of her with husband and fellow artist Diego Rivera, relics from indigenous tribes in which she decorated her home, her surrealist paintings, and her vast collection of elaborate garments, mostly inspired by the Tehuana women in Oaxaca state. I felt right at home with the myriad of colors and indigenous items on display, at times a bit emotional whilst reading through the life experiences of Frida; having contracted polio at age six resulting in one leg being shorter than the other, was a victim of a major car crash at age eighteen, resulting in wearing a body cast (photo of one below), and her passionate, yet tumultuous relationship with Diego Rivera. It made me think, “how can a woman who has suffered so much, make herself up and create such beautiful works of art?” The thought is one that stuck with me on my tour. 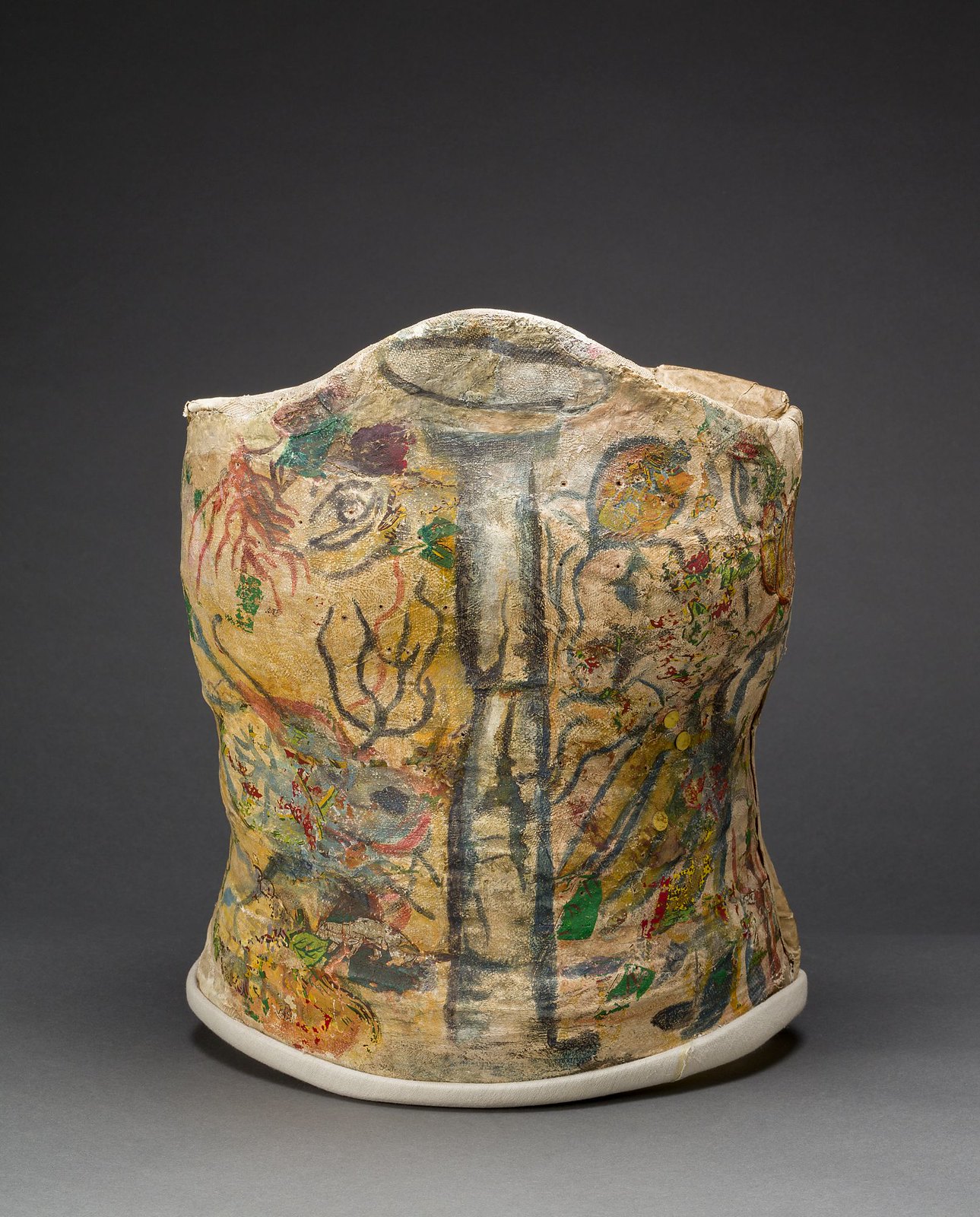 One of Frida’s adorned body casts

Just imagine suffering a terrible car crash which fractured your ribs, legs, collar bone, pelvis, and displaced some of your vertebrae, resulting in bed-rest and a body cast, and still finding the will and energy to paint said body cast, as well as other canvases from bed? Her works are a true testament to the human spirit. 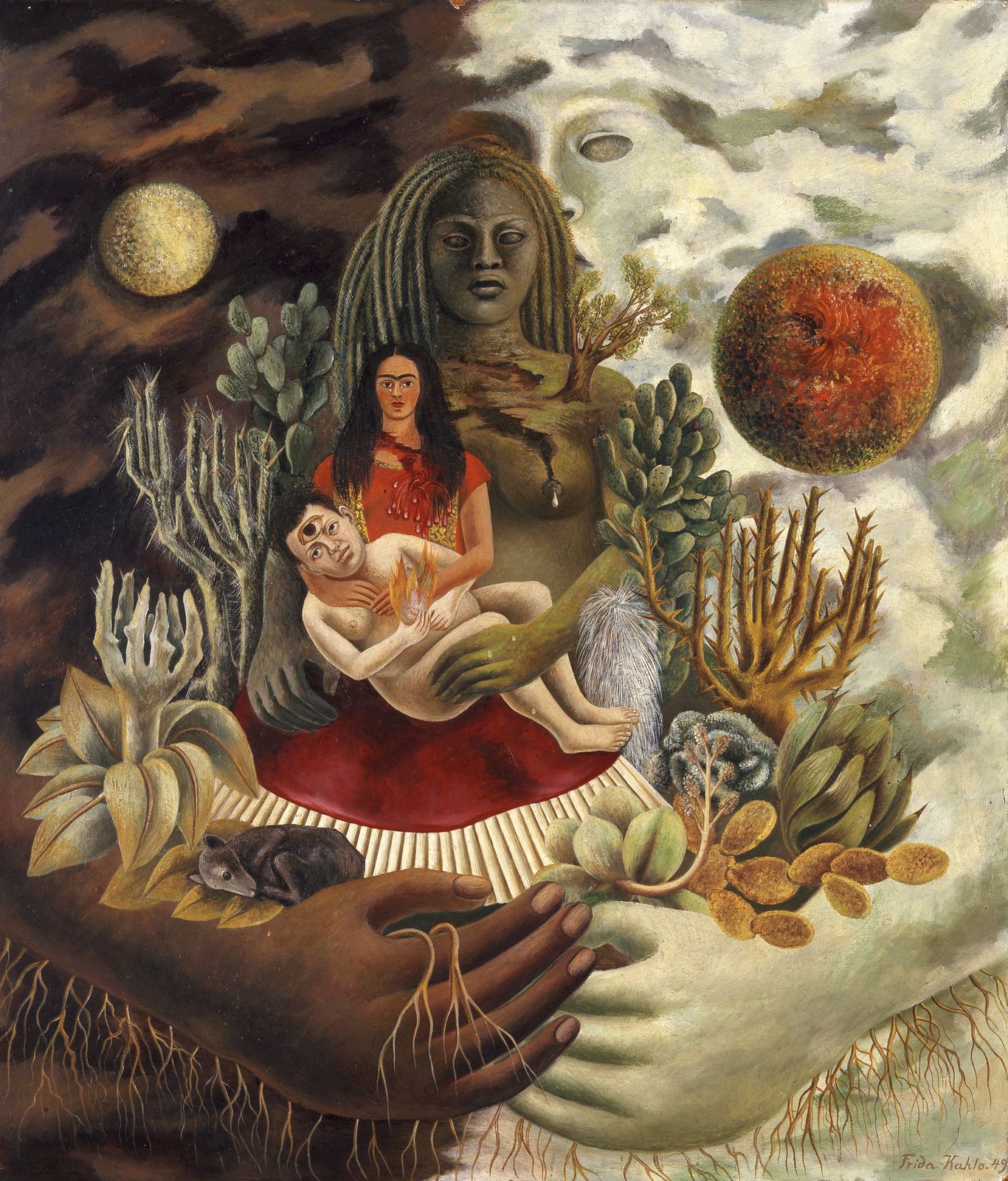 The surrealist nature of her paintings draw you deeply into her world. Take the piece above, The Love Embrace of the Universe, where we see Frida embracing a naked Diego in a style similar to a Madonna and child painting from the Renaissance. They are embraced by what appears to be Mother Earth, whom is embraced by the cosmos, or the Universe. Her multi-layered style really makes you stop and think about her inspirations, and how her mind works, in general. 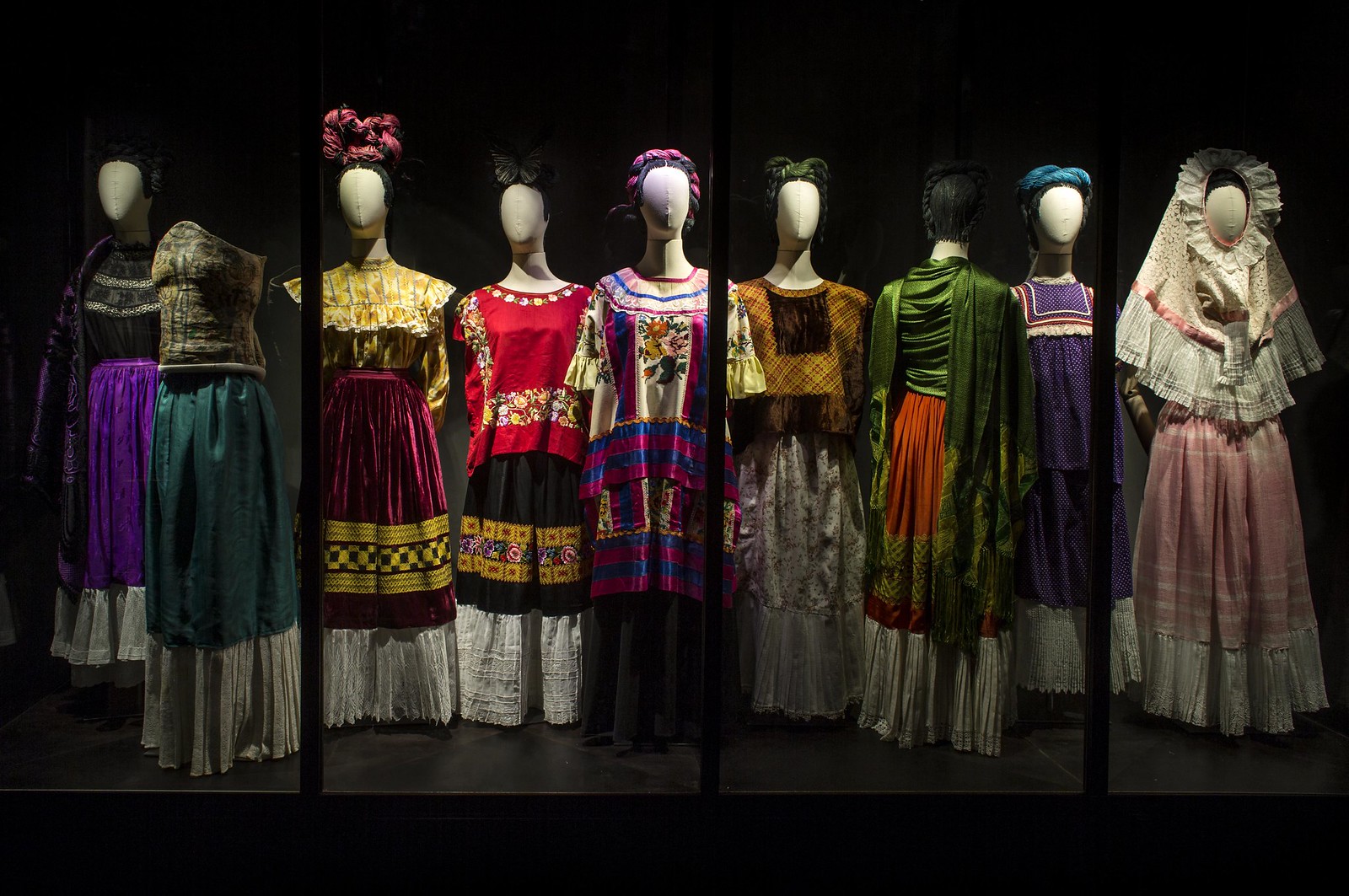 A Myriad of Frida’s Dresses

Frida’s personal style of dress, adopted from the Tehuana women of Oaxaca state, was a deliberate homage to the culture of her mother, as well as a protest of Eurocentric/colonial ideals. It expressed her “radical politics and artistic sensibilities.” The many layers of her clothing, and long length of skirts enveloped Frida in gorgeous silhouettes, while hiding her physical ailments. This idea of “Appearances Can Be Deceiving” is also the title of one of her paintings in which we have almost x-ray view of what lies beneath her clothing, showing a detailed depiction of her limp, and medical corset to support her deteriorating spine. 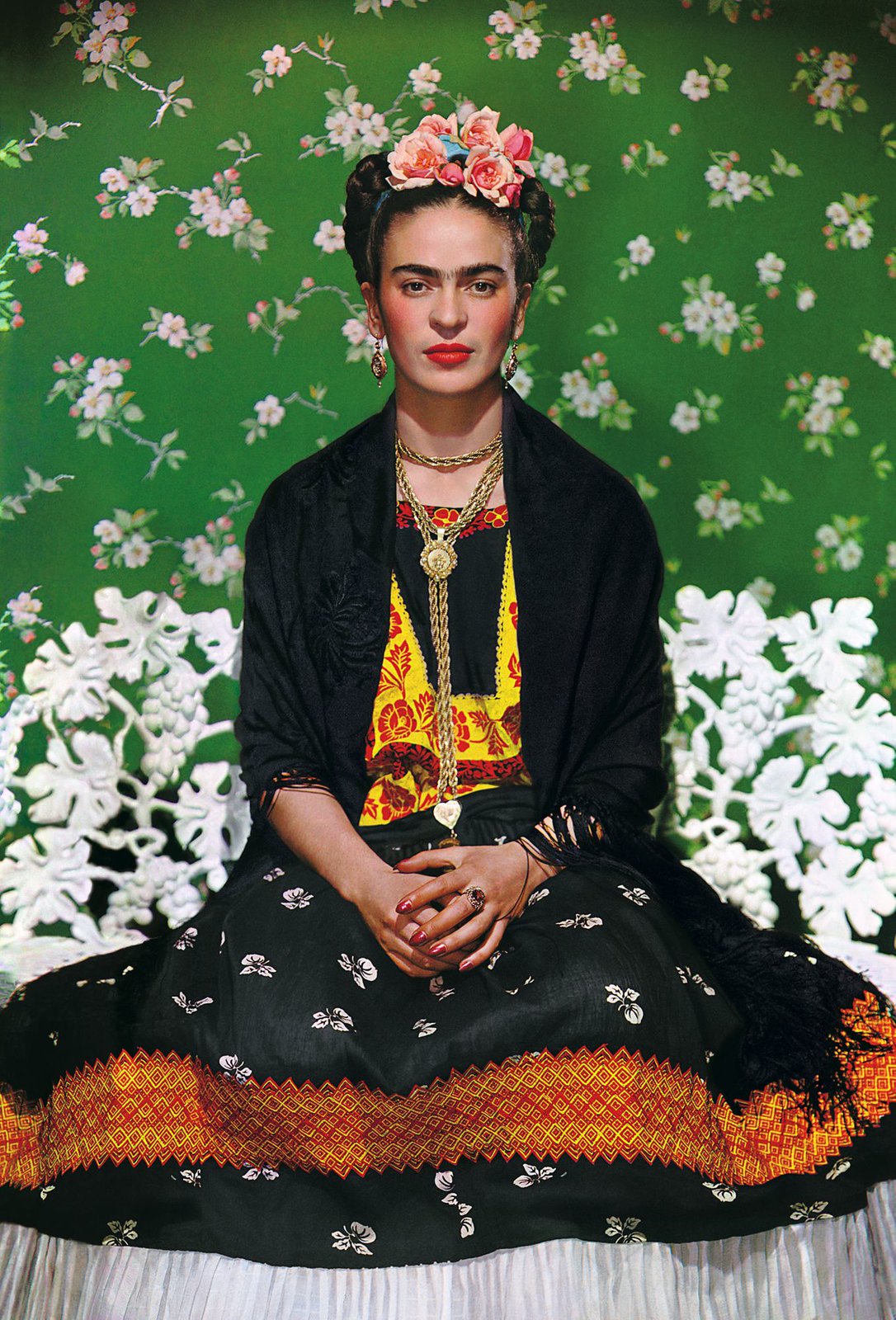 Frida Kahlo: Appearances Can Be Deceiving is on view at Brooklyn Museum until May 12th. Tickets may be purchased here. You can experience a Frida Kahlo-inspired First Saturday on April 6th at the museum. Tickets for the exhibition must be purchased in advance.