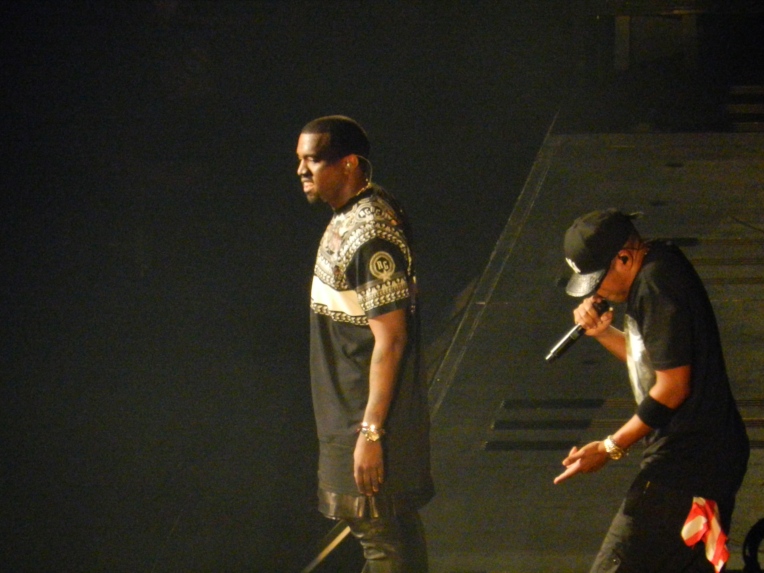 It ain’t safe in the streets, watch the throne…”

Tuesday, November 8, 2011 was the date and Madison Square Garden was the venue. The event was night two of the much anticipated Watch the Throne tour, the musical collaboration between two of my favorite artists and Hip-Hop heavyweights, Jay-Z and Kanye West. Being a huge fan of both men for years, I was super excited that I:

Yes, I know, little Brooklyn girl Andrea should be ashamed of herself for not seeing Hov earlier in life, but hey, times were hard! I’m in a better place now. The show started at about 9:30 PM to a sold out crowd of 20,000 + with no openers, just Ye and Jay. This alone shows how important these two men are to their genre; seldom do you see a Hip Hop show without openers, but this case was a little different. Kanye West and Jay-Z are the artists you hope and pray would be the special guest at a show, so in their moment, it was solely them in the spotlight, no distractions.

In their two and a half hour set, they went through the majority of the tracks from Watch the Throne, along with their own hits. It almost seemed like a friendly battle at times, as they would switch off, track for track. One of my favorite moments, as you have probably read in previous reviews, was the fact that they performed “Ni**as in Paris” three times; I’ve never seen a crowd that hype in my LIFE. They truly know how to command an audience and are incredibly seasoned live performers, as there were no breaks in their set.

Some of my favorite songs performed were “That’s My B*tch”, “Who Gon Stop Me”, “Big Pimpin”, “All of the Lights”, “Where I’m From”, and Jay’s verse from Too $hort’s “Blow the Whistle (Remix)”. I can easily say, that this show was hands down one of the best concerts I’ve ever been to in my life. The crowd was amazing; as a whole everyone knew the words, and energy levels were at an all time high. I usually complain about sitting above the 200 level in MSG, but at this show I couldn’t even tell the difference. The stage was large in addition to the two LED lit podiums provided for both Jay and Kanye, so I believe all concert-goers were given a fair, unique experience of this incredible show.